Meet the 2017 Bartender of the Year 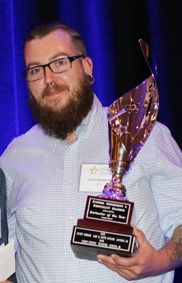 The Alabama Restaurant and Hospitality Association crowned the “Bartender of the Year” in October.
The winner was Steven Bradford, the bar manager at Abhi restaurant at the Summit in Birmingham.

Here is the rundown. It begins with regional competitions all over the state. Each regional contestant receives a list of 10 cocktail recipes once they sign up to compete. On the day of the event, the contestant will get a random selection of two cocktails from that list and will have 10 minutes to create the cocktails plus a Manhattan with their own unique “twist,” and a customized signature drink of their own using one or more of the featured spirits. Contestants are judged on taste, accuracy, showmanship, their crowd interaction, and speed at which they create these concoctions.

This year, regional competitions were held in Mobile, Huntsville, Auburn, and Birmingham. Winners of each regional contest were awarded cash prizes and plaques, along with an invitation to the State Bartender of the Year competition held each year at ARHA’s Stars of the Industry awards dinner.
The four regional finalists competed in front of a crowd of 300 people at the cocktail reception held before the Stars of the Industry dinner at the Sheraton Birmingham Hotel on October 16.

Steven is a renowned local bartender in Birmingham, having previously worked at The Marble Ring and Fancy’s on 5th. At Abhi, he has created an Asian-inspired drink menu using locally grown ingredients like Shiitake mushrooms and Thai basil, incorporated into the craft cocktails. Steven realized his passion for bartending after being accepted to attend Camp Runamok in Kentucky with 150 of some of the most influential bartenders in the world. Since then, he has competed in many competitions and enjoys learning from other bartenders about the cocktail culture and techniques.
​
The event sponsors are Old Forester (Brown-Forman), United-Johnson Brothers of Alabama, LLC, and Sculpture Hospitality (Bevinco and Bevcheck).